In 2016, at the Chiang Kai-shek Memorial Hall in Taipei, I saw a black and white photo that didn’t compute at first. The photo featured a portrait of the Generalissimo, Chiang Kai-Shek, hung above the Tiananmen gate of the Forbidden City in Beijing. Chiang’s upright military posture was evident, even though he could only be seen from the shoulders up. His expression was serious and piercing; his shaved head and moustache gave him a look of grim determination. The portrait was put up to celebrate victory over the Japanese in 1945 – before which it was Sun Yat-sen’s face that had graced Tiananmen square ever since his death in 1925. Mao Zedong’s portrait replaced Chiang’s in 1949. Mao has been up there ever since, except on the odd occasion when another figure has been honoured  – like Joseph Stalin on March 9th 1953, to mark his death.

A traditionalist and authoritarian at heart, Chiang Kai-Shek was the leader of China and chief of the Nationalist army before the Communist takeover in 1949. Defeated after a long civil war, Chiang and his followers escaped to the island of Taiwan and set up an alternative Chinese government. Chiang arrived in Taiwan after decades in China fighting against warlords, communists and the Japanese. Once there, he got busy dominating Taiwan – committing some atrocities along the way – and never gave up his dream of re-conquering the mainland. Chiang is not popular among many circles in Taiwan today (the new government even rounded up statues of him and relocated them in a single park) but the Chiang Kai-Shek Memorial Hall remains an impressive tribute. 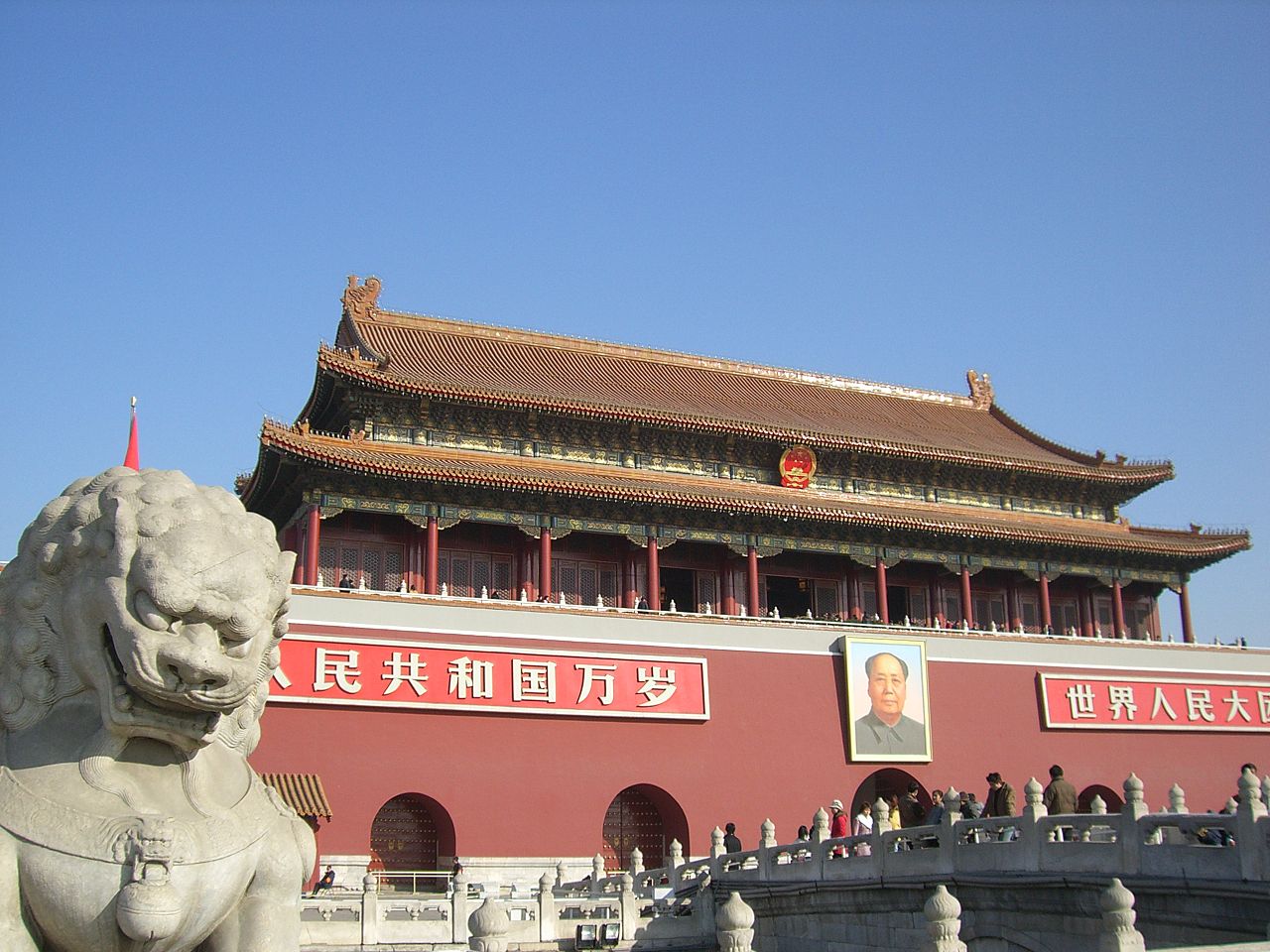 A huge number of tourists get their pictures taken in front of the Tiananmen gate entrance to the Forbidden City, especially domestic tourists on a pilgrimage to Tiananmen square. A popular place to take the snap is beside the Huabiao at the north edge of the square, a ceremonial marble column engraved with a twisting dragon. The column is topped off by a dragon-like creature that looks skyward to convey the mood of the people to the heavens. Past it, Chairman Mao’s portrait is flanked by giant placards that read, “Long Live the People’s Republic of China” and “Long Live the Great Unity of the World’s Peoples.” From Mao’s headshot, you can tell that he stooped, and his receding bowl-cut is instantly recognisable. I had always assumed it was Mao who first had the cheek and bad taste to put his portrait on the Forbidden City, so it was a shock to find out Chiang had been up there before him.

Beijing was not the capital of China in Chiang’s time: his Nationalist government had set up in Nanjing – literally “southern capital” – inland from Shanghai. Later, he was forced by the Japanese invasion during World War II to move the capital further west to Chongqing. And after his defeat in the civil war, Taipei became the capital of the Republic of China – complete with its own Imperial Palace museum, full of artefacts taken from the Forbidden City when the Nationalists fled. Yet despite many of its other architectural highlights, such as the Bird’s Nest Olympic Stadium and the Temple of Heaven, contemporary Beijing could feel like any other mainland Chinese city if it didn’t have the Forbidden City. Once you go through the Tiananmen gate, you can forget the Communists; you are now in the nine-hundred-and-ninety room palace of the emperors of old. Traditional Chinese culture takes over.

You would be hard-pressed to find a copy of the picture of Chiang Kai-shek looking over Tiananmen square inside China – just as other incidents on the square that have sullied the Communist Party’s version of history have been scrubbed out. That is not just the student protests that ended with the mass killings of June 4th 1989, but also the sit-down protests nearby by thousands of Falun Gong practitioners in 1999, a group that President Jiang Zemin named an illegal, subversive cult. Then in 2001, there was an incident where Falun Gong members self-immolated themselves on Tiananmen square. This helped turn public opinion in China against the group, but Falun Gong disputes the events and has claimed that the self-immolations were staged by the government; the figures sitting cross-legged engulfed by flames, they said, were actually People’s Liberation Army soldiers in fire-proof suits.

In Taiwan, Falun Gong practitioners are common and occasionally accost Mainland tourists, trying to change the minds of their cousins across the straits who have been submitted to twenty years of propaganda demonising the group. I noticed billboards in the Taiwanese countryside, featuring a smiling blond woman in her twenties and the phrase “Falun Gong is good”; the other side had a smiling Chinese woman and the same message in Mandarin. The 1989 Beijing massacre is also widely commemorated, in the Taiwanese press and in popular culture. And Chiang Kai-shek’s name, while widely reviled, is a common sight, with buildings and streets named after him, although in Taiwan they use the honorific title Chiang Chungcheng. A few years back there was even a Chiang lookalike in Taipei that mainland tourists liked to get a photo with. 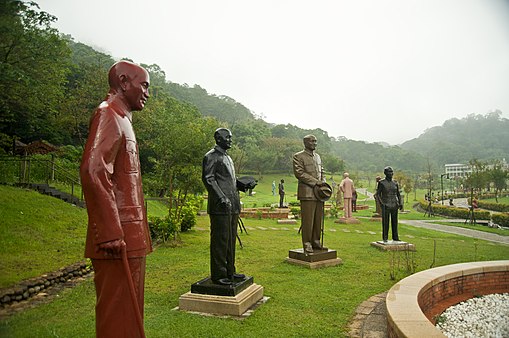 Chiang, who died in 1975, is no longer a thorn in the Chinese Communist Party’s side. But to see this photo of him on the gate of the Forbidden City, I had to go all the way to Taiwan. A great player in China’s modern history had been swept under the carpet. The defeated Nationalist party, enemies of the people, are rarely mentioned. There is a museum to Chiang Kai-shek at his former residence in Zhejiang, but otherwise, he is not so much vilified as ignored. The photo likely exists inside China, but it is not one you would want to take out at a dinner party.

I also wrote a version of this article in Spanish.